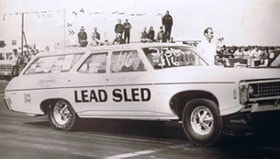 It’s 1970 and you’re enjoying a day at the strip. The typical cars file up to the line and charge from the gate. Then you see a 4,500-lb ’69 Chevy Kingswood 9 passenger wagon lumber up to the line, its massive body dwarfing everything else around. They can’t be serious! What’s that doing here? Before you can contemplate further, it launches down the ¼ mile and thunders across the line a mere 12.41 seconds later, at 111.88 mph. Stunned, you can’t help but think “What the hell just happened??”

Well, the explanation is simple. This particular Kingswood (which was a trim level equal to the Impala in the 1969 full size wagon four model line-up) happened to have a 425-horse 427 cubic inch L72 under the hood, heavy duty 12-bolt Posi rear end and an F41 suspension…all from the factory. Chevrolet left no clues to any of this when it rolled off the line, and perhaps that’s what makes this wagon so special. It didn’t need a sporty coupe body style, or the smaller size and flashiness of the pony and muscle cars of its day. It’s wasn’t a stripped down light-weight either, running with the full factory stock Kingswood interior, including the 3rd bench seat, intact. From the factory it was just a big white, plain-Jane wagon; a deceptive cover for the pure power, no nonsense, factory drive train built for just one purpose: to win. Perhaps it was the ultimate sleeper.

This Kingswood was one of only 546 full size Chevrolet’s in 1969 to be built with the L72 option. But what made this wagon truly “one of a kind” is that it was ordered by none other than the soon-to-be AHRA Top Stock champ Tom Akin. At one of the first race events Tom (of Hudson, Iowa) was asked what the name of his wagon was since after all, every car had to have a name. Not having one Tom said the first thing that came into his head, and at that moment the legend of Lead Sled was born. When Tom’s skills behind the wheel came together with the Kingswood and the tuning skills of John Day (the performance manager at Schukei Chevrolet in Waterloo Iowa where the car was ordered), the results were, well, legendary.

Lead Sled, having run consistently in the mid 12 second range with Tom behind the wheel, had a long list of accomplishments. As noted in a feature article printed in Speed and Supercar Magazine titled "Weighty Wonder" back in the day, Tom and his wagon were the “scourge of AHRA and IHRA lower stock classes” for several years, and seemed simply unstoppable. Some notable victories included (but are certainly not limited to) being the 1969 AHRA World Series champion, 1970 AHRA Top Stock points champion, 1970 AHRA Top Stock Eliminator champion, and a 5-time AHRA World Record Holder (including the AHRA Formula 1 I/A automatic and J/A automatic as well as Formula 2 J/A). The performance of Tom and his Wagon was enough to catch the attention of Dick Harrell, a racing legend in his own right, and they were invited to join the Dick Harrell racing team.

Inevitably however, as is almost always the case, famous drag cars eventually die out. They blow up, wreck, or simply get outdated and parted out. Lead Sled was retired and Tom Akin sold it in 1973 but not before first stripping the Lead Sled logos and pulling the L72 out and selling it separately to a dirt track racer. Sadly, that engine met its demise and is long gone. But that’s not the end of the story. The second owner managed to find a 1972 LS5 with a Turbo 400 tranny that amazingly, was also built by John Day, the same builder of Lead Sled’s original L72 and dropped it in between the fenders.

After being in storage for some 35 years, Lead Sled has emerged from a long slumber, thanks to its 3rd owner who has recently found it in New Hartford, Iowa and purchased it. With the exception of the L72 and the Lead Sled logos, it’s still equipped exactly as it was when Tom Akin retired it – right down to the red, white and blue paint accents applied in 1971. 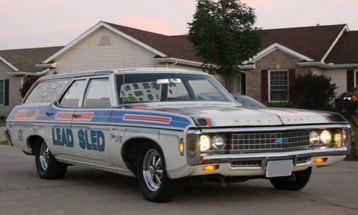 It’s rare to find a racing legend like Lead Sled that has survived for 40 years, but it’s almost unheard of to find the collection of documentation that goes with it, including the original Protecto-Plate, newspaper clippings, time slips, photos, letters from sponsors, magazine articles etc, which is so extensive it would take you days to go through it all. The present owner, Dave Belk, has re-applied the Tom Akin Lead Sled graphics and done maintenance to keep it road-worthy, but has otherwise kept it in the unrestored original condition Tom Akin left it in. Tom Akin himself has since had the pleasure of being reunited with his legendary wagon and is thrilled to see it has survived.

Recently, Dave took the wagon to a local strip – not to break records but more for a nostalgic pass, only to find the legend of Lead Sled there waiting; the crowd standing in ovation as it pulled up to the line. They have not forgotten and the legend - still respected today, lives on.
The Equipment - as ordered new in 1969 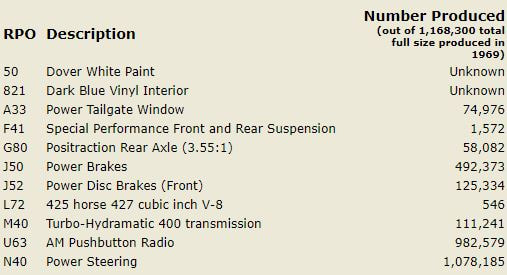