Featured here are a pair of 1969 Chevrolet Biscaynes which are correct, numbers matching 425 HP 427 CI factory 4 speed muscle cars. Available  from Chevy for only four years, from 1966 through 1969, production numbers are the lowest for the 1969 Biscayne. Documentation from Chevrolet is sketchy at best on the 427 Biscayne, but estimations reveal that between 77 and 98 were produced with the 425 HP engine and the Muncie M-21, 4 speed transmission (the Biscayne on the right), and only 6 to 10 were produced with the M- 22  "rock crusher" 4 speed transmission,  (Biscayne on the left) in 1969,  making these beauties  truly rare muscle cars.

The Biscayne on the left with the M-22 "rock crusher" transmission was given a frame off restoration in 1989, and shows only 63,000 miles with full documentation  from it's date of sale. A complete factory air conditioning system was also added to this Biscayne at the time of it’s restoration. It has the basic factory vinyl interior. The floors, trunk and frame on this car are also exceptional and no repairs were needed on them. When restored, the color was changed from Fathom Green to Tuxedo black and factory air was added.

Showing only 50K miles on the odometer, the Biscayne on the right above was recently stripped to bare metal, and given a complete cosmetic restoration by RJ Classic Restorations in Akron New York. It has an upgraded factory vinyl interior, a hurst shifter, line lock and dash mounted spark advance system. Both cars have been published in numerous magazines.
​
This pair of Chevy muscle cars are some of the rarest street rockets ever produced by Chevrolet. 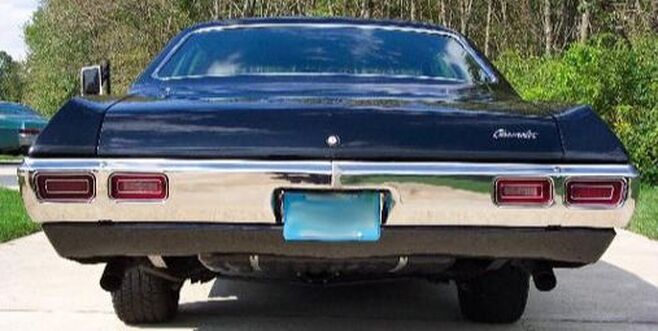