The trim tag (or cowl tag) is the next important tag on your vehicle after the VIN. There essentially 2 styles of trim tags found on 1969 full size Chevrolets, that used in previous production years up to and including early 1969, and that used for late 1969. Canadian and American built Chevrolets used variations of these two styles. Examples may be seen below:
Decoding your trim tag is easy if you have all the information you need. Fortunately, we're going to provide that information for you here.
Listed below is each position on the trim tag and how to interpret it.
​
Model Year
Very simple, it will appear as "69" for all 1969 Chevrolets

Series Number or Division Series
Regardless of the series, this 3 digit code will always start with a "1" indicating Chevrolet Motor Division. The next two digits indicate if it is an Impala, Caprice, Bel Air, or Biscayne, but unlike the VIN they DO NOT indicate if it has 6 or 8 cylinders. This is because Fisher Body did not follow exactly the same system as the Chevrolet VIN. For example, if your VIN indicates you have a 6 cylinder car, let's say the first 3 digits are 155, the trim tag will read 156, and will not reflect that information. This is why some cars with 6 cylinder VINs may appear to have 8 cylinders by the trim tag.

Unit Number
This is a unique number assigned to each car by the factory it came from. It is the sequential build number for the body, but has no correlation whatsoever to the VIN or any other number, nor does it relate to the vehicle assembly unit number in the VIN.

A = First Week
B = Second Week
C = Third Week
D = Fourth Week
E = Fifth Week
​
Therefore, a time built code of "03D" would equal 4th week of March, 1969.
Some Canadian built cars have a different system on early 1969 tags. They consist of three hyphenated numbers. At this time we do not have an exact reference to understand these codes, but will list it here once available.
Trim Combination
​This three digit number indicates the style and color of the interior. Below are GM charts showing the meaning of all trim combination codes. 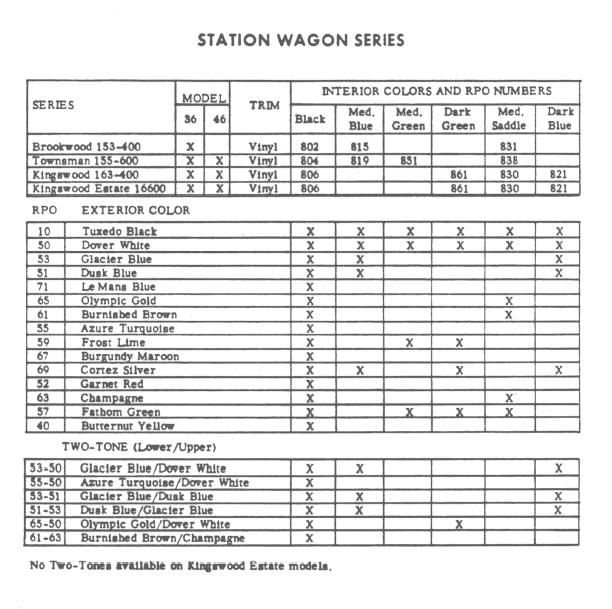 Upper and Lower Body Colors
In 1969 the body color codes changed from alpha (such as CC or C-C for White) to numeric (White is now 50). These codes are present in the previous charts. Where two sets of numbers are present, or a number code followed by a letter, it indicates a two-tone color scheme. The first set of letter is always the lower body color, and the second set is always the top. Features such as convertible or vinyl tops are also represented here. Instead of a numeric number for the upper body color, letters may be present. The following are some (but not necessarily all) of the possible letters for vinyl or convertible tops.
AA = White
BB = Black
EE = Parchment
CC = Dark Blue
FF = Dark Brown
GG = Midnight Green

​There are other documented cases of there being a single letter after a number, for example 59 S. The "S" is known also to indicate a vinyl top, but it is unknown at this time of other single letters that may also represent either a convertible or vinyl top.
​
Summary
We've presented here as much information relevant to decoding a trim tag as we have available. Please keep in mind however that in many cases unique numbers or codes may appear on trim tags, relevant sometimes only to the plant where the car was built. We know that there are formats for all codes on the trim tag, but have seen many examples or variations from the standard formats described here. If you have additional information on your trim tags, let us know, we'd love to hear about it!